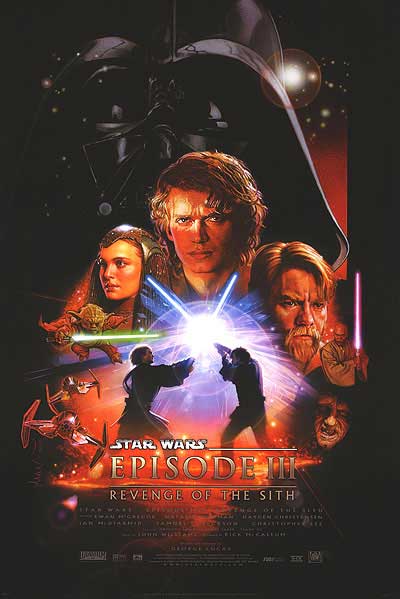 George Lucas has improved slightly over Episode II. At least his protagonist has a somewhat coherent reason for his actions. It's just not a very interesting or relatable one; and once again, Lucas has overlooked a much better motivation which is staring us in the face.

Here is the setup:
This has some sort of logic to it. Ian McDiarmid does a splendid job as the voice of Satanic temptation, pleading with Anakin to let him save Padmé's life, but there are still major problems.

We, the audience, can't relate to being able to see the future or save someone's life by magic. We can try and empathise with Anakin's terrifying prophetic dreams, but we aren't doing so from personal experience. (The Dune novels are much better at portraying the terrible power and burden of prescience.)

Anakin's dilemma also raises questions for anyone with a logical frame of mind, or just anyone who has read one of the many, many stories in which a prophecy does not turn out as expected. What, specifically, will end Padmé's life? How will studying the Dark Side with Sidious enable Anakin to save her? He will have to work quickly, given that she is a few months pregnant when Sidious makes his offer, and he has foreseen her death in childbirth. What if she dies because he is busy learning the ways of the Dark Side, instead of staying close to protect her?

None of this seems to occur to Anakin. We've seen in previous films that he's not terribly bright, but it is dramatically unsatisfying to see him stumble to his doom like a sleepwalker, never stopping to question whether Sidious' offer is really going to help him.

Once again, there is a much better motivation which George Lucas has inexplicably overlooked.


In Episode II, Lucas made an effort to set up the idea that Anakin and Padmé's marriage is forbidden. This, we can identify with. We all have experience of being attracted to someone we can't or shouldn't pursue. Jedi are not allowed to marry, so Anakin must choose between his wife and unborn child, and his place in the Jedi order.

This has real emotional punch, but in Episode III, Lucas barely mentions it. Anakin is openly kissing his wife in public places, and spending the night at her apartment instead of some Jedi barracks, but no one seems to take any notice. Showing Anakin having to sneak around, in fear of being found out, would raise the dramatic stakes.

Palpatine could also play on this much more than he does. He comes close when he tells Anakin:

Don't continue to be a pawn of the Jedi Council! Ever since I've known you, you've been searching for a life greater than that of an ordinary Jedi . . . a life of significance, of conscience.

The Jedi need you for now, but they know about your marriage. When the war ends, you will be expelled from their order, and forbidden from using your Jedi abilities.

What will you be then? Just the husband of a galactic senator, until the scandal drives her from office. It would be a tragic waste of your greatness. What you need is another path to power.


This raises the intriguing possibility that the Jedi are intentionally turning a blind eye to Anakin's marriage. It would be easy enough to illustrate this with a conversation between Obi-Wan and the other Jedi. Perhaps Obi-Wan is concerned at Anakin's furtive behaviour, but the council tells him in no uncertain terms to leave the matter alone.

Now consider the pivotal moment when Anakin confronts Darth Sidious and the Jedi Master Mace Windu in the Chancellor's office. Sidious is apparently at Windu's mercy; Anakin steps in and saves Sidious by chopping off Windu's lightsaber arm. How much more effective would this be, if Anakin first asks Mace:

What about my wife and child?


If Mace Windu is left speechless, or worse still starts lecturing Anakin about the Jedi Code, it would be all the motivation needed to send Anakin over the edge.

It would make Anakin's motivation less "pure", but that's a good thing. Nobody is purely motivated by love, least of all Anakin. He is going to spend the next twenty years as the evil, terrifying right-hand man of the galactic Emperor. For want of a better term, his personality needs a dark side. It's perfectly all right for pride and ambition to contribute to his downfall.

Losing the will to live


Lucas isn't done assaulting us with idiotic, incoherent, incomprehensible character motivations. In one of the very last lines spoken in the film, we learn Padmé is dying:

MEDICAL DROID: Medically, she is completely healthy. For reasons we can't explain, we are losing her.
OBI-WAN: She's dying?
MEDICAL DROID: We don't know why. She has lost the will to live. We need to operate quickly if we are to save the babies.

(Incidentally, what kind of useless medical droid is this? Did someone really program it with "losing the will to live" as a valid diagnosis? Or is it a synonym for "memory allocation error #6649", hacked in by a programmer under deadline pressure?)

Let's stop and consider this. Padmé's husband became evil and is now presumed dead; but she still has two infant children who need her. Her love for her newborn children is not enough to save her. She doesn't commit suicide; she is killed by the sheer force of her despair.

This scene shows a shocking level of contempt for women. It reminds me of those old films in which the heroine faints at the first sign of stress. Nowadays, that is reviled as sexist and demeaning, not to mention boring. Lucas brings fainting to the next level; the angst is all too much for Padmé, and so she dies.

Let's review where Padmé is before she goes into labour. She confronts Anakin at the landing platform on Mustafar, and in a jealous rage, he uses the Force to choke her into unconsciousness. (So much for Anakin acting out of love; he's an abusive husband as well as a mass murderer, but I digress.) Now she is heavily pregnant, seriously injured, and a very long way from proper medical attention.

Imagine Obi-Wan returns from his fight with Anakin to find her going into premature labour. He orders Threepio to fly them to a medical facility, but they don't arrive in time. While they are in transit, Obi-Wan has to deliver the babies himself. He does his best, but he's no doctor. He saves the babies, but Padmé dies from her injuries and complications of childbirth.

Again, this has real emotional punch, because the audience can empathise with Obi-Wan. He feels guilt from his failure to save Padmé, and a fierce devotion to the babies he has just delivered. It seemed like the obvious and natural conclusion. I honestly expected it to happen when I was sitting in the cinema, watching Episode III for the first time, but instead I got this nonsense about losing the will to live.

I don't know why Lucas decided to take this direction. My personal suspicion is that he was just too squeamish to think about childbirth as a bloody and dangerous event. Killing Jedi children is fine, but a baby being born is just icky. Padmé had to die, but "cleanly". Unfortunately, Lucas trashed all of Padmé's previous character development for his idea of a clean death.

Lucas tried, albeit patchily, to build up Padmé as a wise, independent, courageous individual. At this crucial moment, he throws it all away. Padmé doesn't go down fighting. Instead, she loses the will to live, and checks out to make room for the orphaned-farmboy plot in Episode IV. Nice going, George.

At least we now have Episode VII to look forward to. Based on the latest trailer, I am cautiously optimistic.


On a lighter note, here is a compliation of women fainting in the movies: