As predicted, looking after a new baby has drastically reduced my cinema-going. I saw ten films in the cinema this year, and thought I was doing well to manage that.


Given the limited opportunity, I did my best to choose films carefully, and there have been some excellent releases this year. So, I'm going to do my usual breakdown anyway. For the sake of completeness, I'll do a top seven instead of a top five, so everything I saw gets a mention.

The Pride of Chicken Soup

It's odd that I've never blogged much about food, because I really like cooking. It's enjoyable and satisfying. I find it relaxing, given that my day job in software engineering is very abstract; it's a pleasant change of pace to work with something I can touch and taste. Last but not least, cooking for others has a primal importance. We all need food to live. Preparing food for others is giving a tiny bit of life.

After a lot of practice, I'm a pretty competent amateur cook. I can confidently make Thanksgiving dinner with all the trimmings for eight or ten people, and it's very tasty if I say so myself. Boxing Day was the most proud I've ever been of my cooking skills, and all I made was a simple pot of chicken soup.

My son Zach had his first birthday on Christmas Eve. He's a wonderful, happy, active baby, but unfortunately he's got his first major cold right now. It's just a cold, nothing unusual, but he doesn't understand what's happening. He's uncomfortable, unhappy, and his nose is blocked up, which interferes with smelling, chewing and swallowing.

Zach was refusing all food aside from fruit purée, which was something but not what I'd call a balanced diet. Normally he loves baby oatmeal porridge, but not then, and processed baby food from jars was rejected on sight.

So I spent a couple of hours making soup out of the leftover roast chicken we had on Christmas Eve, with some leeks, carrots, herbs and thin pasta noodles, and zapped it in the blender until it was smooth. Our uncomfortable, cranky baby ate up a huge bowl of it, by his standards. Afterwards he snuggled in my arms with his head on my shoulder, tired but contented.

It's only a cold, and I expect he would have eaten something else when he got hungry enough, but it didn't come to that. It was a beautiful warm feeling to help Zach in this way. (It has occurred to me that maybe breastfeeding mothers feel something like this, all the time.).

The next day, because the gods have a sense of humour (and so does Zach), he was refusing chicken soup and back onto porridge. But at the time, it was just exactly what he needed. He still has a cold but he's looking better now.

Happy birthday, young man. I don't know what you will do when you grow up, but I believe you'll never be too old for your dad to make you a bowl of chicken soup.

Belle posing by the tree. Wishing everyone a happy and peaceful Christmas Day, wherever and however you spend it. 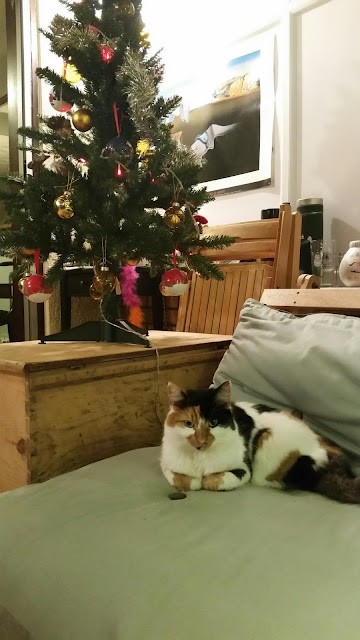 Posted by Iain Roberts at 04:24 No comments:

I went to see Star Wars: The Force Awakens on Saturday. It was great fun.

The last time a Star Wars movie lived up to my expectations, I was five years old and watching Return of the Jedi on its first release. It was such a huge relief to simply enjoy a Star Wars film, instead of cringing at leaden dialogue, incoherent plots and implausible character motivation.

I might do a full review later. Meanwhile, I agree with the SF author John Scalzi's verdict: It's not great art, but it's very enjoyable and entertaining. That's not too surprising, because it's what Disney does best.

I'd add that Star Wars inspired a whole generation of science fiction fans. For the most part, we aren't blind to its flaws, but view it with enormous affection. Even after the appalling prequels, there was a huge reservoir of goodwill and creative talent available to make Episode VII -- not to mention a lot of cold, hard cash. JJ Abrams' job was to marshal those resources and produce something with the same sense of fun and adventure as the original films.

Abrams has done all of the fans proud, and I'm looking forward to the next instalment. This time, the anticipation is uncomplicated: Hey wow, that was great! I want to see more! (Last time, it was more like: Oh, please let Lucas learn from his mistakes and not f**k up the next one so badly.)

The keen of eye might have noticed I didn't see the film until three days after its release. This was forced on me by babysitting logistics, but it presented a dilemma. Did I take the risk of viewing spoilers, or deprive myself of Facebook and Twitter for a few days? I chose the second option, and I'm really glad I did.

Did you want this desk chair? Too bad, it's mine now. 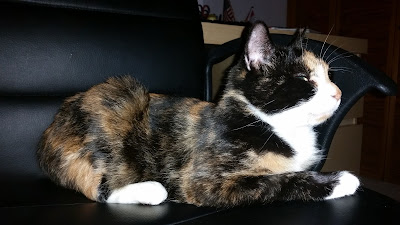 Introductions continue, slowly and cautiously. The cats are at least able to eat breakfast on either side of a barrier grating. The main thing is to build up Belle's confidence so she doesn't see Joni as a threat; it's a slow process but we think we are seeing signs of progress.

An incident from last month illustrates the depth of Jeremy Corbyn's problems, which have not abated since.


Angela Eagle MP is the Shadow Business Secretary; in addition, as Shadow First Secretary of State, she deputises for Corbyn at Prime Minister's Questions when he is absent. So it is quite extraordinary that Eagle will not say if her party leader is fit to be Prime Minister:

Asked again if [Corbyn and McDonnell] were suited to highest office [Eagle] said: “I work with people the party gives me to work with.

“We all have our strengths and weaknesses and the point of having a party is that you can bring together the collective wisdom and that’s what I’m in the middle of doing. It’s one of those questions that you want me to answer in a certain way so that you get a headline out of it and I’m not playing that game this morning."


Consider the Leaders of the Opposition in recent elections: Kinnock, Blair, Hague, Howard, Cameron, Miliband. In the country at large, some were better liked and more successful than others. But if you asked any of their shadow cabinet colleagues whether they were fit to be Prime Minister, the answer would have been a firm, unhesitating "yes".

For some, that answer would not have been the whole truth. In the case of Hague or Miliband, their colleagues must have had more than a few doubts. In private, they might have added, "At least, I bloody well hope he's up to the job." But in public, for the TV cameras? In a functioning opposition party, the only answer is, "Yes of course, our party leader would make an excellent Prime Minister."

A possible exception is Iain Duncan Smith, and he was defenestrated before he had the chance to lead his party into a General Election. History may or may not repeat itself for Corbyn. Either way, Labour is in deep trouble.

The fact that Eagle considers it a trick question, instead of a trivial one, speaks volumes about the state of the Labour party. Corbyn can't sack her from the Shadow Cabinet for such rank disrespect, because who could he possibly replace her with? He has few enough MPs willing to serve in shadow posts as it is.

It also leaves Eagle unable to answer an obvious follow-up question: If you won't say whether your leader is fit to be Prime Minister, why should we vote for any of your lot?

There's plenty of blame to go around for this sorry situation. I expect it will get much worse for Labour, before it has any chance of getting better.

Nice and cosy in her cat bed. 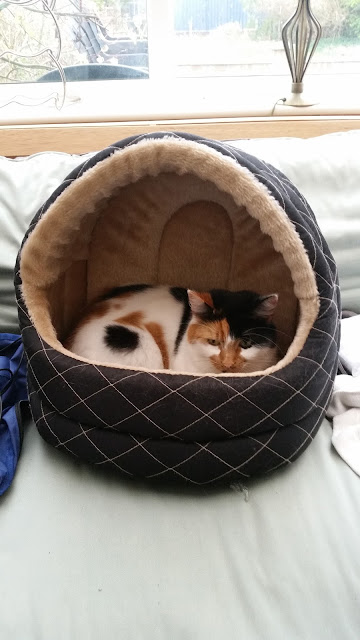 Introductions to Joni continue. It's a three steps forward, two steps back kind of situation, but I think we are seeing progress. I've looked back at old emails and reminded myself it took at least seven weeks before Belle and Dexter were getting along decently, and Joni has only been here for three, so it's early days still.

I think it's fair to say the problem lies with Belle more than Joni. Belle is a highly strung cat, afraid of other cats, and tends to lash out if she feels cornered. Joni for her part seems curious about Belle but basically content to live and let live. Belle was much the same with Dexter at first, so given time we are hopeful she will calm down.

On UK airstrikes in Syria

I'm trying to understand what the UK bombing campaign in Syria is meant to achieve.

The brave lads of the RAF are off to drop explosives on a faraway desert, largely inhabited by people of the Muslim faith. It worked beautifully on Iraq (1998), Afghanistan (2001-present), Iraq again (2003-present), and Libya (2011), all of which are now models of peace, prosperity and democracy. Is the idea to achieve the same brilliant results once more?


Sarcasm aside, I'll concede that not all interventions are alike. I'll extend the government a degree of fairness it may not deserve, and try to consider this bombing on its own merits.

Enjoying her victory over the fluffy toy. 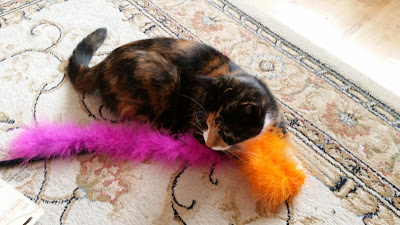 Relations between the cats are progressing slowly. They have had one more scuffle, but on the whole we think they are getting used to each other.