The pet shop in the Beehive Centre in Cambridge has automatic doors and tolerates the occasional cat wandering in, as long as they don't disturb the rabbits. This splendid lady was sitting next to the window when I went in to get cat food. 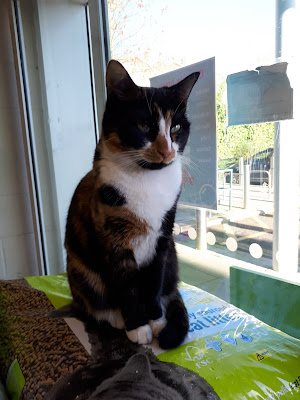 This week I've been preparing my usual Thanksgiving turkey feast, and being thankful that I'm getting out of the UK.

It gives me no pleasure to say this. I love the UK, I've made my home here for many years, and I wish it well; but the news on Brexit looks worse with every passing day.

It's becoming increasingly apparent the government has no plan, no grip, no strategy, and no prospect of locating any of them using both hands and a map. It doesn't understand the technical complexities of Brexit, and doesn't want to. It deals with inconvenient facts by pretending they don't exist. Meanwhile the clock ticks inexorably on, and the hour of Brexit draws ever closer.

If the great British public understood the consequences of their government's foolishness, I think there would be riots in the streets. Brexit is a massive and costly challenge at best; in this government's careless hands, it will make the poll tax look like a birthday party.

It's exactly two years tomorrow since we adopted Joni.

She is a much loved cat; playful, friendly, and amazingly patient with our toddler. She will be coming with us to Canada and we hope for many more happy years together. 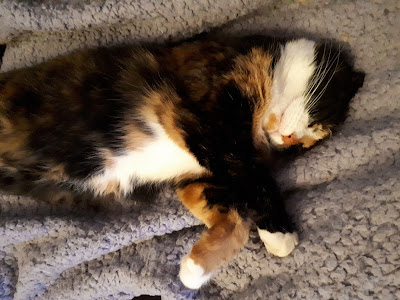 A Tale of Two Recipes

I usually avoid so-called wellness bloggers; but I must admit, the stereotype of joyless vegans obsessed with kale is not entirely accurate. Some of them make stews with venison and red wine. And kale. And a shocking degree of racism.

By way of background, my local butcher had venison in stock, so I picked some up to make into a stew and started Googling around for recipe ideas.

Something called "smoky venison stew" sounded good, so I clicked the link, and was confronted with 500 words of text before the actual recipe.

It starts off in a mildly amusing way. Chantelle, the author, explains how she dreams of hunting her own food, and never has because she is too squeamish; but expresses her gratitude for the animal giving its life to feed her. Okay, fine. I actually agree, we should treat our food animals with respect.

Then the post takes a screeching left turn into crazytown, as Chantelle starts rambling about power and energy, bison, seals and the traditional Inuit diet:

Wild meat is so full of power and energy, there is nothing closer to organic, or free range. It’s hard to imagine what it must have been like when there were bison everywhere and the people had no shortage of wild food. Nowadays it’s more difficult to attain, I have heard that even the native Inuit cannot hunt their natural food. Environmentalists have banned them from hunting seals (a main food source) and there is only a certain section of the land where they are allowed.


What? Seals? I thought this was a recipe for deer. The village butcher doesn't stock seal.

The nights continue drawing in, and it's time for another photo of a warm and sleepy cat. 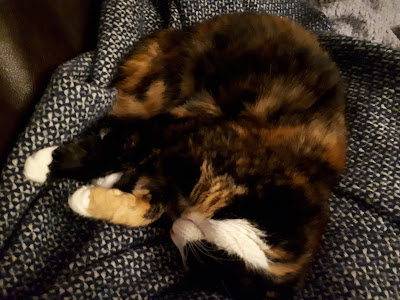 I'm leaving the UK in April 2018 for a new job and new life in Toronto, Canada. I was born in Canada, and after twenty-six years I will be going back.

There are a lot of positive reasons for this move. It means our son can be closer to his grandparents. It's an exciting new job and I think it will be good for my career. It looks like a fascinating city and a great place to live. I will be able to watch North American sports in the proper time zone.

That said, as regular readers of this blog will have noticed, I'm very pessimistic about the future of the UK in the face of Brexit. 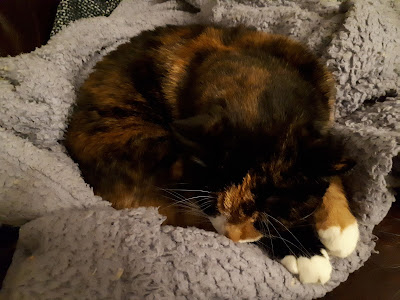 Posted by Iain Roberts at 10:12 No comments:

Trump could destroy us all.

It's become a commonplace thing to say. It's the new normal. The United States' nuclear arsenal is commanded by a man with all the foresight, empathy and self-control of a spoiled child.