This handsome fellow lives a few doors down the street from us; we imaginatively refer to him as the Fluffy Orange Cat. He's very friendly to passing humans, although we suspect he may be a bit of a bully to other cats. Here he is enjoying the afternoon sunshine in his front garden. 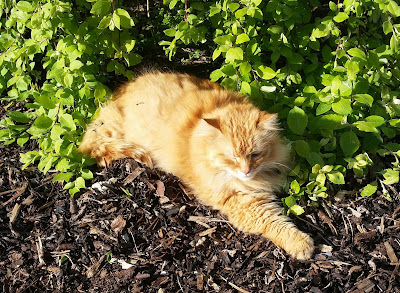 The Useless and the Cruel

This is an extraordinary election. On the one hand, we have cruel but competent Tories; on the other, well-meaning and inept Labour. The Tories are not widely loved, but it's unclear if Labour could even function as a government.

A recent column by George Monbiot acknowledges Labour is incompetent, but claims it doesn't really matter:

Monbiot is wrong. To see why, let us consider the word "humane".

In order to be humane, it is not enough to have good intentions. If I sit around thinking nice thoughts while my child goes hungry, that is not humane behaviour. Being truly humane requires action and hard work.

Joni is bored by talk of human politics. 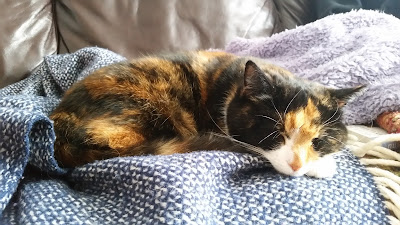 Waiting for the Hammer to Fall

It is not surprising Theresa May has called a general election. She is likely to secure a crushing victory, such as very few Prime Ministers have done before her. For the rest of us, the news is not so good.


I think this will be an awful result. The Conservatives are a mean party, in both senses of the word: Cruel and petty. Their expected victory will give them a free hand to victimise the poor, the sick, the disabled, and immigrants. As I've recently discussed, the Conservatives celebrate cruelty as a virtue; one they value above economic success. This does not bode well for their conduct of the Brexit process.

All the same, the early election has a certain democratic logic. The referendum result has instigated Brexit, but the ballot paper said nothing at all about what kind of Brexit we want. In theory, the general election gives us a chance to decide just that.

In practice, we are caught between multiple devils and the deep blue sea.

The Conservatives offer cruelty, but also decisiveness. They will not make many decisions I agree with; but I must admit, they are largely united, and capable of setting policy and carrying it out. They are able to function as a government. It's not clear that any other party can.

The Scottish National Party will keep their grip on Scotland. The more dysfunctional Westminster is, the more it bolsters their demand for a second independence referendum. I don't blame them -- they are perfectly clear that independence is their overriding priority -- but it means they are unlikely to take a constructive role in the government of the UK.

The Liberal Democrats are unequivocally opposed to a hard Brexit. For that alone, I would probably be willing to give them my vote. As it happens, I agree with them on most other issues too. I will gladly support them as I did in 2015. Their former MP Julian Huppert is standing again here in Cambridge; he has a good chance of winning, and I hope he does.

On a national scale, though, Liberal Democrat victories are likely to be no more than symbolic. They have been reduced to a mere nine MPs. If they triple or quadruple their representation, it would be very impressive; but it would do little to dent the expected Conservative majority, especially since many of their potential gains are at the expense of Labour or the SNP.

Even with Labour in disarray, and a clear contrast with the Tories on Brexit, the LibDems are stuck at 10% or so in the polls. I think there will be a hard ceiling on LibDem support, because they simply are not trusted. Voters have not forgotten their coalition with the Conservatives, and their broken promise on tuition fees. Maybe this is unfair, but politics is not a fair competition.

Comrades, we should be struggling together


As for Labour... well, I hardly know where to start.

Prime Minister Corbyn? Really? He's a woefully incompetent leader, and his party quite plainly can't agree on what day of the week it is. Less than a year ago, eighty percent of Corbyn's own MPs voted no confidence in his leadership, and his personal popularity is abysmal. In the latest YouGov poll, 50% think Theresa May would be the best Prime Minister, next to a pitiful 14% for Corbyn. "Don't know" is beating him by a factor of more than two to one.

Labour has published a list of ten pledges. They sound... nice. I mean, who isn't in favour of full employment, improved social care, and protection for the environment? But positive change does not come about solely from the power of good intentions. It requires both ruthless efficiency, and an ability to negotiate and compromise. That does not sound like today's Labour party.

If Labour really means to do this, it's the most ambitious programme for any incoming government since 1997, maybe since 1945. Blair and Attlee had united and fiercely disciplined parties, and landslide majorities in Parliament. Corbyn will have neither.

If by some miracle Labour wins a slender majority, I don't believe they are remotely capable of implementing their pledges. They might as well have promised to ban rain on bank holidays, for all the difference it makes. We would see a weak and divided government, flailing helplessly in the face of the slightest challenge. In some respects that might be preferable to the Tories, but it's hardly surprising most of the electorate doesn't see it that way.

The ten pledges are notable for their failure to mention Brexit. How will Labour handle the central issue of this election? I have no idea, and I strongly suspect the Labour party doesn't know either.

As for Jeremy Corbyn and John McDonnell trying to negotiate a comprehensive trade deal with the European Union... my mind is well and truly boggled. These are not detail-oriented people, and their preferred approach to capitalism is shouting angry slogans about it. Putting them in charge of complex, delicate, and vitally important international negotiations would be like putting a toddler at the controls of an aircraft. It's possible they would be even less suited to the task than Boris Johnson, which is really saying something.

It's a moot point anyway. Labour's chance of overcoming the Tory lead is so remote, it can only be seen through a powerful telescope. For practical purposes, we're waiting to see how large the Conservative majority will be.

It could be very large indeed. The Conservatives and their allies in the press will unleash a monstering of Corbyn such as we have never seen. His past record provides plenty of material to work with.

Labour's performance in 2015 was so poor, it doesn't have that far to fall. Its near-wipeout in Scotland entailed a 17% swing, which is unlikely to be replicated in England. It had 30% of the UK popular vote in 2015, and even in a worst-case scenario, it is likely to hang onto 20% or so.

That said, there are a lot of moving parts which can work to the detriment of Labour. Remain voters will switch to LibDems, Leave voters to UKIP or the Conservatives. Those disillusioned with Corbyn's leadership will vote for other parties or simply stay home. A great many seats could be handed to the Conservatives, even in the most unlikely places.

Current polling has Con 44, Lab 25, LD 10, UKIP 10. Let's try the Electoral Calculus swingometer with Con 48, Lab 20, LD 15, UKIP 5. This gives a Conservative majority of 216; an all-time record if we leave aside wartime coalitions, and all the more impressive with only one or two Tory seats in Scotland. Of course this is only a crude estimate, but the general point is clear.

I think the Labour party is rather looking forward to this election, because it will allow them to get on with their real objective of fighting each other.

Labour has observed an uneasy truce since last year's leadership contest, but internal grudges have not been forgotten or forgiven. After the expected defeat, moderates will blame Corbyn's incompetence, Corbynites will blame the MPs' disloyalty, and the party will once again plunge into civil war. Few outsiders will take much notice; and for good or ill, Theresa May will have almost total power to rule the UK as she sees fit.
Posted by Iain Roberts at 05:00 No comments:

Joni wishes everyone a good Easter weekend with many relaxing naps. 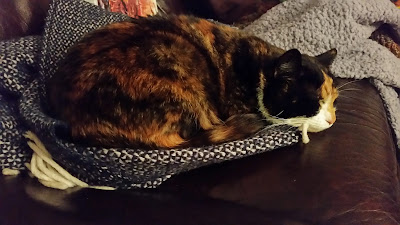 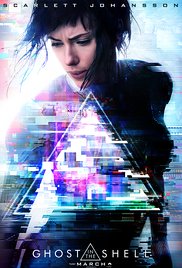 Queen of all she surveys. 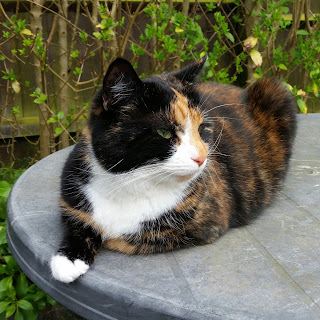 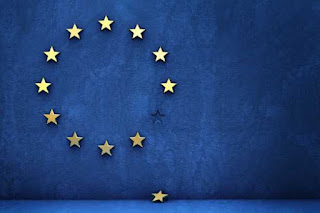