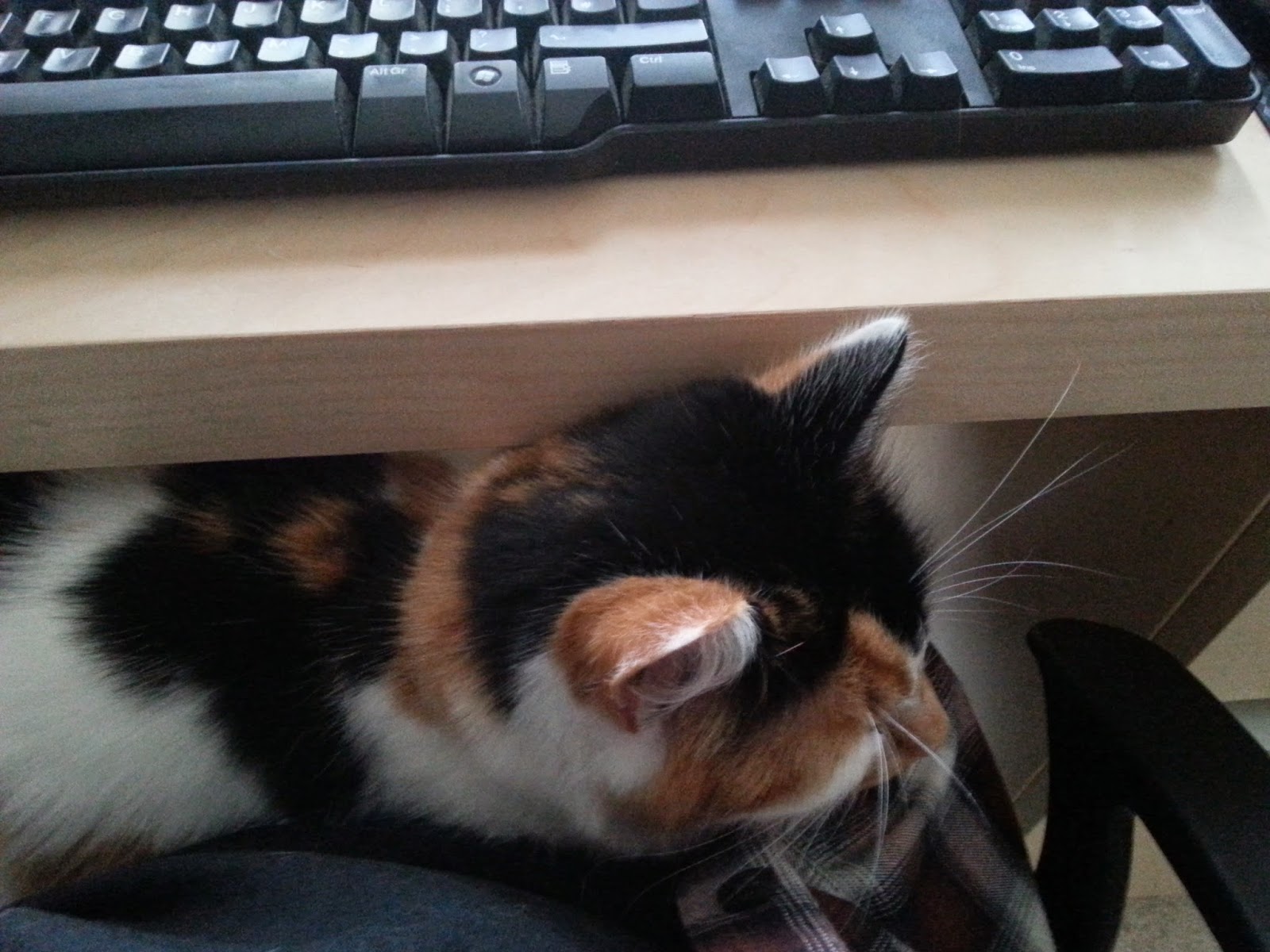 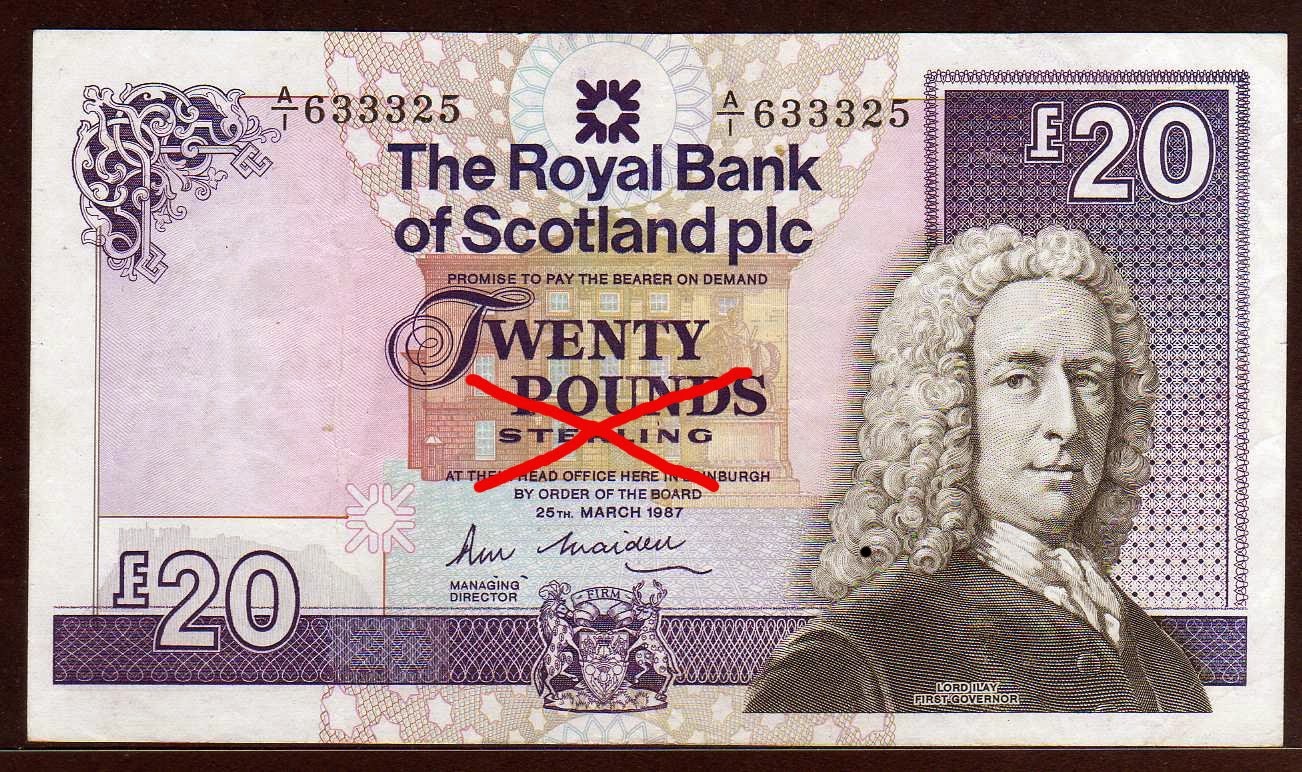 An old friend of Alex Salmond was unhappy in his job, and asked him for advice. This is how their conversation went:

SALMOND: I think you should quit your job, then have them hire you back as a consultant, on exactly the terms you want. You will participate in only the projects you want and no others.
FRIEND: Sounds great, but what if it doesn't work?
SALMOND: It will work.
FRIEND: Yes, but what if it doesn't?
SALMOND: Why wouldn't it? You're good at your job, right?
FRIEND: Yes.
SALMOND: Then it is clearly in their best interest to work with you. You've helped build up the company, so you're entitled to their cooperation after you leave.
FRIEND: Yeah, but my boss doesn't see it that way. He said if I leave, he's never working with me again.
SALMOND: He will do what I say is the sensible thing, because that's what people in positions of authority always do.
FRIEND: That isn't strictly true. I need a plan B. Should I look for another job, start my own business, or take early retirement?
SALMOND: Yes, you can do one of those.
FRIEND: But which one?
SALMOND: You don't need to choose one, because your original plan is best for you and it will work out just fine. As long as your boss understands it's what you really want, he will agree.
FRIEND: It's not totally under my control. I really do need to think about which of these three fallback options is best for me.
SALMOND (getting angry): What is the matter with you? You have three different alternative plans! That's better than having only one! Plans are like buses, it's great when three of them turn up at once. There's no need to discuss it any further than that.
FRIEND (backing away slowly): OK, Alex. Thanks for the help, but I have to be going now.

Dexter watching for intruders from his favourite spot in the greenhouse. 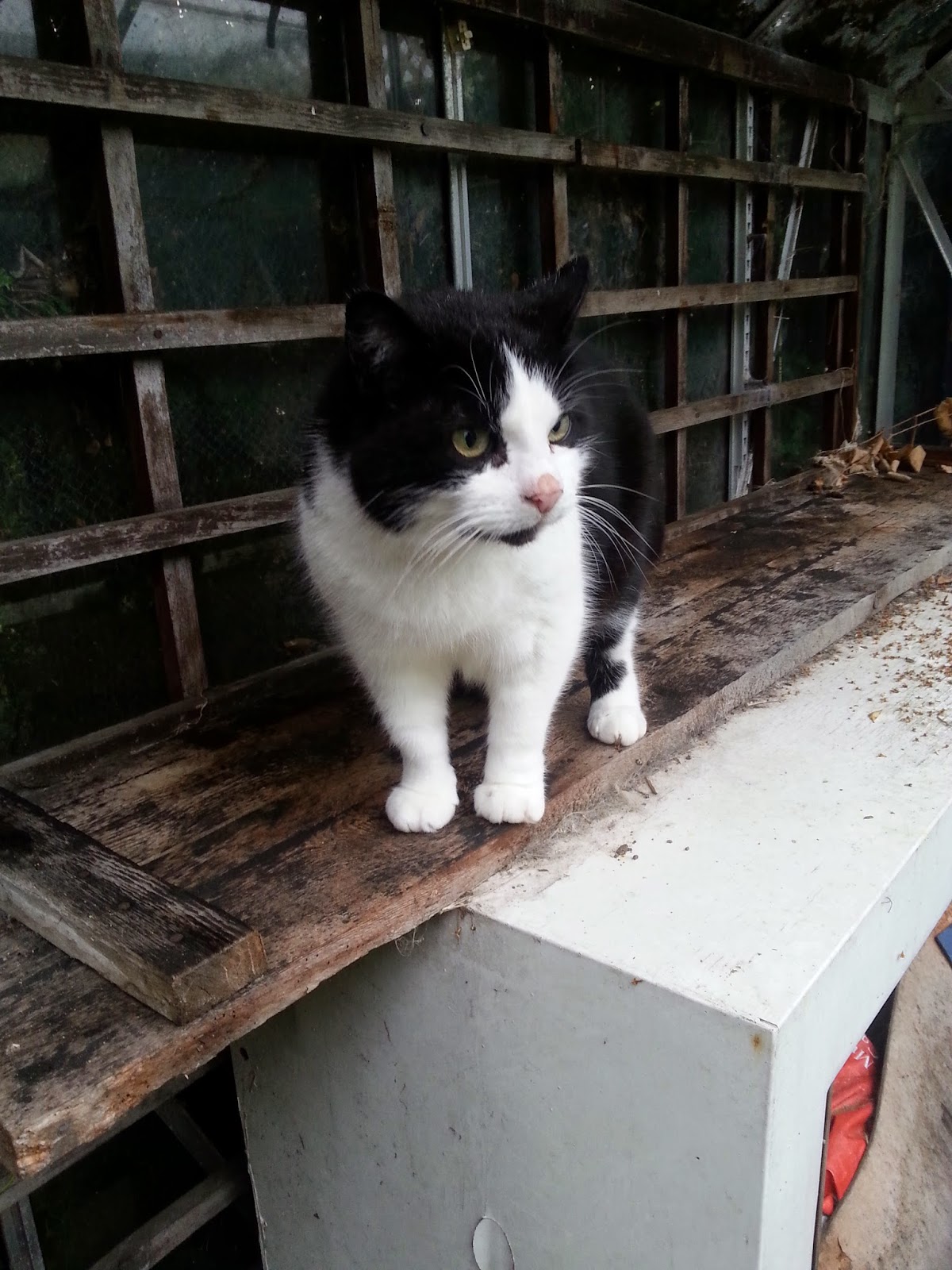 Scotland's Vote 13: Arrival of the FoES


The 2014 Future of England Survey (FoES) is an opinion study conducted by Cardiff and Edinburgh Universities, surveying English attitudes towards Scottish devolution and independence. The report published yesterday by Cardiff University is well worth reading.

On the whole, the FoES supports my prediction that English public opinion would not be generous towards an independent Scotland. I'm not saying I approve of this hardline attitude or it is necessarily in England's best interest, but we can be sure it will influence English politicians who want to win the next election.

There is a lot of fascinating material in the report, but there are three particular findings I want to highlight.

Relaxing in the evening sunshine. 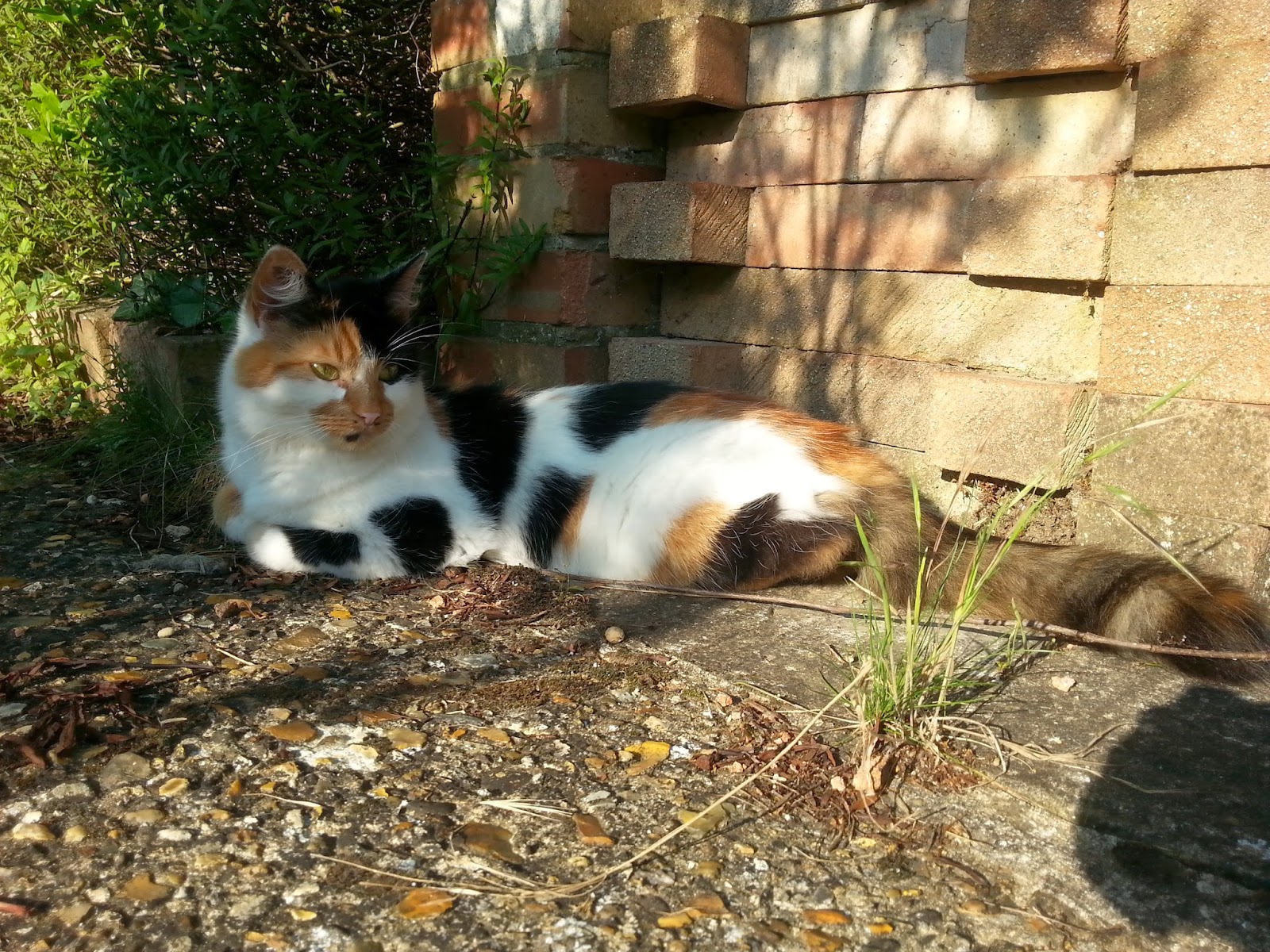 Gin and Tacos: A Recommendation

I am not referring to the drink and the foodstuff. Although those are also good.

Gin and Tacos is a blog written by a political science lecturer somewhere in the midwest of the USA. The author is known as Ed; for professional reasons he is vague about his last name and location.

It is without a doubt some of the truest, funniest, angriest writing on modern America I have ever seen. It's mostly about politics, but Ed maintains a tradition of No Politics Friday in which he turns his keen observational eye and furious invective on more general matters. He has been posting five times a week since 2004 so the archives are vast.

It's fair to say Gin and Tacos is an inspiration to my own blogging efforts, and long may it continue.

A few of my favourite posts:
I don't know why so many of them are food-related, since it's not exactly a major theme of the blog, but life is mysterious that way. The political stuff is great too.

Scotland's Vote 12: Castles in the Air

This is a follow-up to my previous post on the SNP and the currency issue. It looks at the SNP's claim that the rest of the UK (rUK) will accede to their demands; and statements from the SNP in the last few days.

An Offer You Can't Refuse

The SNP claim rUK will have no choice but to agree to a sterling union, for two reasons. The first is increased transaction costs between Scotland and rUK. On the SNP's own figures, these would amount to £500 million per year. This is 0.04% of GDP for rUK.

The second is the SNP plan to refuse to take on any of the UK national debt if rUK does not agree to a currency union.

Let us be clear: This is a deliberate policy choice by the SNP. It is entirely possible for a Scotland with its own currency to take on a proportionate share of UK debt, but the SNP have decided to rule this out unless rUK agrees to a sterling union.

The SNP's figure for Scotland's share of UK debt interest is £5 billion per year. So, the SNP are threatening rUK with a financial penalty amounting to less than 0.5% of GDP, or about 1% of the rUK government budget. In SNP rhetoric, this will eclipse any other considerations. It is meant to bring the imperial British state to its knees and force it to accept whatever the SNP demands.

This is optimistic, bordering on delusional. The rest of the UK is perfectly capable of absorbing these costs. It would be prudent to take the Conservatives, Labour, and Liberal Democrats seriously when they say they will not agree to a currency union. They have reiterated their position again and again in recent days.
Read more »
Posted by Iain Roberts at 11:00 No comments:

In recent days, Alex Salmond has reiterated his claim that Scotland and the rest of the UK (rUK) will retain a monetary union after Scottish independence:


It's Scotland's pound and we are keeping it.

It is entirely possible the rUK government will refuse its consent for such an arrangement. All three main UK political parties have said very clearly they will do just that. Salmond himself has tacitly recognised this, because he has threatened retaliation in the form of refusal to take on a share of the UK national debt.


Let us suppose the UK government is not bluffing; and it regards increased transaction costs between rUK and Scotland, and taking on the entire UK national debt, as a price it is willing to pay. In this case, what is the SNP's preferred fallback option? Absolutely no one in the SNP is willing to say.

Enjoying a shady place on a hot summer day. 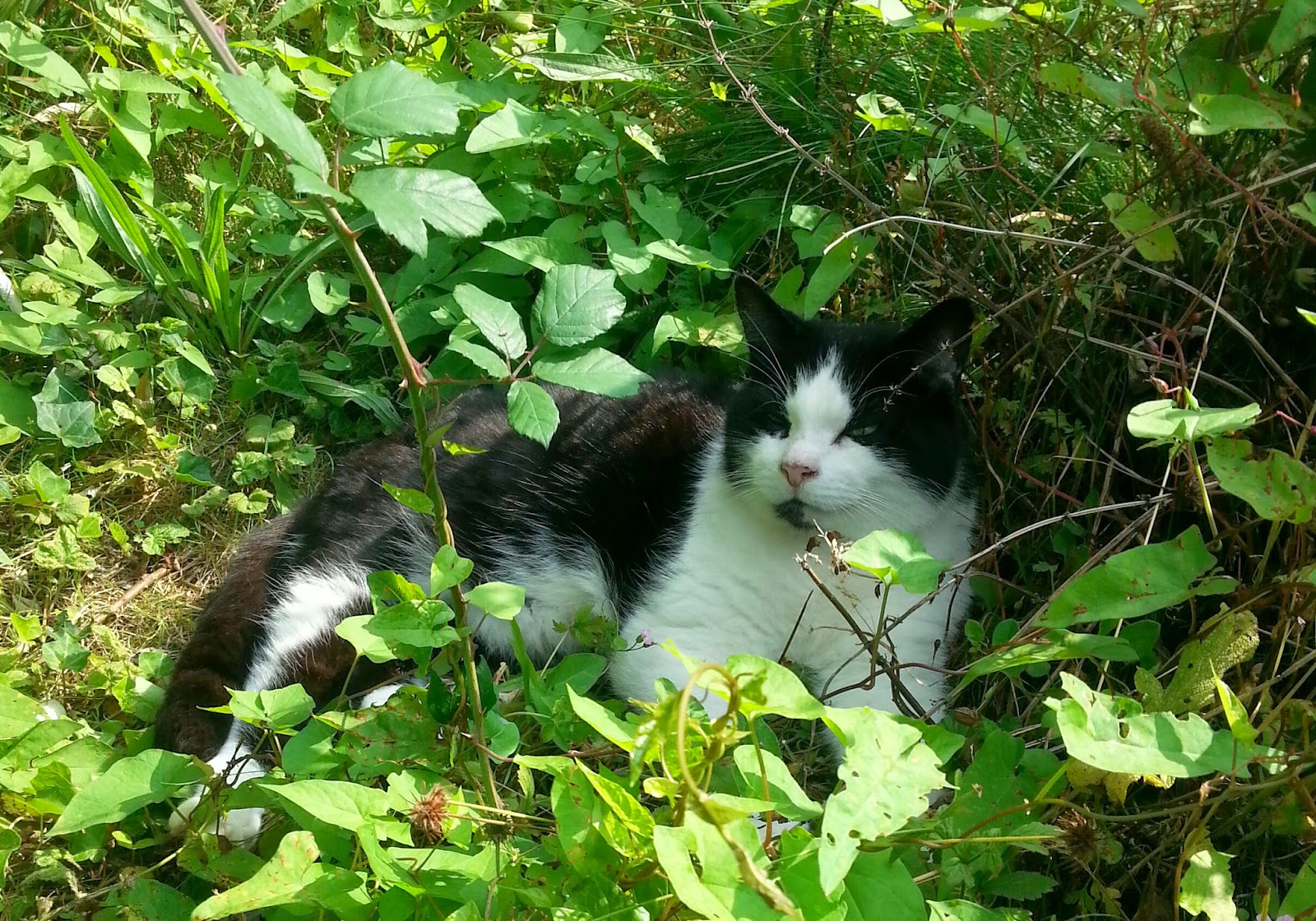 The UK government recently published a snappy article containing "10 Myths and 10 Facts" about Scottish independence, and I considered writing a detailed breakdown.

I have not done this for two reasons. First, doing it properly would require a lot of work dissecting the financial claims and counter-claims; I don't have the time and others have already been over that ground. Second, I was brought up short by "myth" number 2:

What in Loki's name is this? How did it get into the list? Why?

I cannot give a timely response to the Salmond/Darling debate, because I am visiting family seven time zones away from the UK. Instead, I am writing this a few days before the event.

I'm going to go out on a limb here, and predict that the debate consisted of two middle aged men in suits. It covered talking points which they have rehearsed ad nauseam for months if not years, and it did not change many hearts or minds.

If the debate degenerated into hand-to-hand combat, ending with one participant triumphantly holding aloft the severed head of his opponent, I will have to admit I was wrong.

Either way, a post on an older referendum story will appear tomorrow and you may find it interesting.

I am visiting my ancestral homeland in Canada for the next couple of weeks, so blogging will be a little light.

Fear not, Cute Cat Friday will remain on schedule. I might be late with social media posting, but the feline photos will go up automatically at noon on Fridays. I will also schedule a couple of midweek posts on non-cat-related matters.

Speaking of social media, my Twitter handle is @iainrobertsblog -- follow me for notification of posts and occasional other tweetings.

Belle is bored and considering her next move. 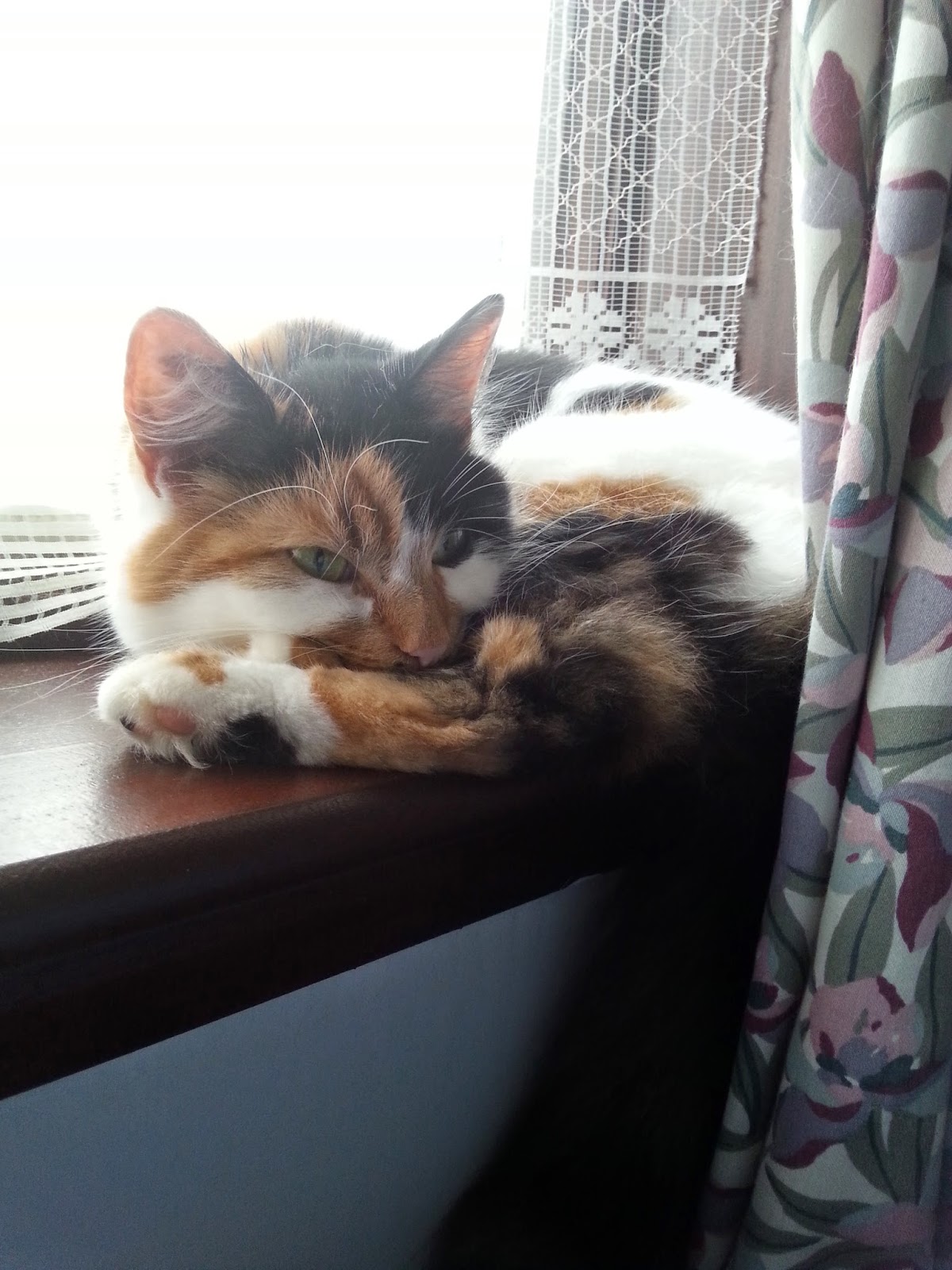