One of the great problems with the Star Wars prequels is the lack of intelligible character motivation. The previous post looked at Episode 1; we now move on to Episode 2. 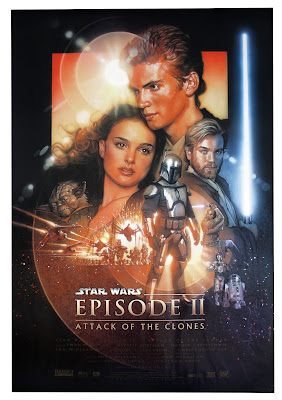 Episode 2 requires major surgery. A few lines of dialogue won't do it.

There are two parallel plot lines: Obi-Wan's investigation into the attempt on Padmé's life; and Anakin and Padmé hanging out together and supposedly falling in love. The first story is fairly enjoyable, but in the second, the problem of motivation is worse than ever.

For Padmé, it makes no sense whatsoever. She has been working at the highest levels of politics for at least ten years. She's had previous boyfriends -- and Anakin's surly jealousy when he asks about them is distinctly alarming. Padmé is a strong-willed and sophisticated woman of the galaxy. She might feel sorry for this miserable, self-centred Jedi brat, but has no possible reason to fall in love with him. It's hard to understand why she even tolerates his presence.


Here's what's wrong with it:

The last point deserves some expansion. Lucas couldn't film a convincing romantic scene if his life depended on it. If that was all, we could point and laugh for a bit, then move on; but he has Padmé announce her love after Anakin has confessed to mass murder of children. This is what one might call an unforced error.

There are lots of horrifying, murderous antiheroes in cinema: Hannibal Lecter, Michael Corleone, Patrick Bateman. You know what these characters have in common? So far as I can recall, none of them massacre children. Furthermore, none of them appear in films aimed at children.

It would have been bad enough if Anakin killed at a distance by pressing a button, as he did in Episode I (at the age of nine). In this case, he used a lightsaber. He cut those children to pieces with his own hands. He was close enough to look in their eyes and hear their pleas for mercy.

If Lucas had actually filmed this scene instead of cutting away, Episode 2 would have become a grotesque horror film, more Texas Chainsaw Massacre than Star Wars. However, what happened is clearly explained to both Padmé and the viewer. I know women are said to like bad boys, but this is sickening.

There is something very wrong with Padmé. I have to wonder if something is wrong with Lucas too. Does he expect us to sympathise with Anakin, when he has the blood of children on his hands? What kind of psychopathic storytelling is this? At best, Lucas was being astoundingly stupid when he wrote and shot Anakin's confession.

Let's get away from the dark and disturbing contents of Lucas' mind, and back to something more in keeping with the Star Wars we enjoy. Here is my proposed replacement for the Anakin/Padmé sequence on Naboo:

Anakin's mission is to escort Padmé to her home planet of Naboo, then come straight back to Coruscant to continue his training. Obi-Wan is reluctant to allow it, but no fully trained Jedi are available, and Anakin pleads for the assignment because he wants to spend time with Padmé.

En route, their refugee ship is hijacked by space pirates. They are working for one of the Hutts, and mean to break up the ship for parts and sell its passengers as slaves. They fly it back to Tattooine. Anakin and Padmé heroically escape, defeat the pirates, and rescue the prisoners, but the ship is damaged in the process.

Another ship can come get the refugees, but will take some time to arrive. For now, Anakin and Padmé are stranded on Tattooine. Anakin misses his mother, so they go and look for her. As in the original story, they arrive too late to rescue her from the sandpeople. Anakin unnecessarily kills some of their warriors (and feels guilty about it later), but spares the noncombatants.

Padmé now comforts Anakin in his grief. She has no idea how to survive on a harsh desert planet, so Anakin has to pull himself together and help. He ends up working for his stepfather Lars; his skill with machines allows them to make a modest living.

Padmé at first misses the comfort of her palace, but comes to appreciate the stark beauty of the desert. One evening, they kiss beneath the double sunset, before hastily remembering Anakin's vow of celibacy. They finally travel to Naboo on the replacement refugee ship, but no sooner do they arrive than they hear Obi-Wan's distress call, and charge off to help him.

This may need a little work, but it fixes the original problems:

Also, as a bonus, we get Jedi fighting space pirates.

There are lots of other ways Lucas could have addressed these flaws. Instead, he put his young couple in a nice, pretty location and expected the romance to show up on its own, helped on its way by a confession to mass murder. It really doesn't work like that, and the audience suffers for it.

(Part 3 looks at Revenge of the Sith.)