The Star Wars prequel trilogy is generally acknowledged to be awful. There are occasional bright spots, helped along by charismatic actors like Ian McDiarmid, Liam Neeson or the late Christopher Lee, but for the most part they're painfully bad. Why is this?


Terrible acting and dialogue are nothing new for Star Wars. If you watch the original trilogy, the script is dreadful and Mark Hamill can't act his way out of a paper bag. I think the prequels really fall down on storytelling, and more specifically on motivation.

We put up with the flaws of the original trilogy because, among other reasons, Luke has compelling motives for his actions. He wants to get away from his uncle's farm and do something heroic; then he wants to become a Jedi, help his friends, and avenge his father; then he wants to defeat the Emperor, redeem his father and save the galaxy. The audience can understand these desires and identify with Luke. It is also pleasing that the stakes get bigger for Luke in each episode.

Leia's motivation? Restore the galactic Senate where she once held a seat, and avenge the destruction of her home planet. Obi-Wan? He feels responsible for the evil of his former apprentice Darth Vader, and wants to make up for old mistakes. Han Solo? At first he's in it for the money, but against his better judgement he comes to believe in the Rebel cause (and gets the hots for Leia). All these stories make sense to the audience.

The villains also have interesting motives. Darth Vader wants to "end this destructive conflict and bring order to the galaxy," but there's more to him than that. He wants to settle old scores with Obi-Wan, and be respected by Tarkin and the other Imperial officers. Later, he wants to make Luke into his ally, or at least stop the Emperor from destroying him. Again, this makes sense. 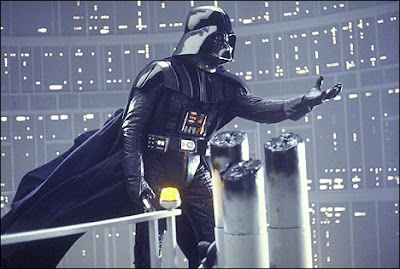 In the prequels, it doesn't occur to George Lucas to give his characters sensible motivations. The sad thing is, he could have fixed a lot of this with very minor changes, such as a few lines of dialogue. The resulting films would have been vastly more entertaining.


The problem with Jar-Jar


Jar-Jar Binks has a motivation of sorts, but it's boring. He's a clumsy, helpless coward, and he knows it. His motivation is to survive the galactic war he's blundered into. That's all.

It does nothing to move the plot along. The Ewoks are cutesy and annoying, but give the furry little guys credit, they are good at fighting stormtroopers. (That says as much about the stormtroopers' lousy tactics as it does about the Ewoks, but that's a whole other rant.) Even C-3PO occasionally does something significant.

Jar-Jar merely stumbles around being a nuisance. He has all the sense of purpose of a Labrador puppy, and contrary to what George Lucas wants us to believe, he's considerably less cute. If Qui-Gon had rescued a puppy (or the Naboo equivalent), and it spent the rest of the film following him around, stealing his food and chewing on his lightsaber, it would have much the same effect on the story and be far less irritating.

I don't claim to be an authority on narrative technique. But if you can replace a major character with a puppy without detriment to the plot, does he need quite so much screen time in your sci-fi epic? I think not.


At the opposite end of the spectrum of cool, let us consider Darth Maul. Ray Park makes him look authentically intimidating, and Peter Serafimowicz does a fine job voicing him with quiet menace. Here's the problem, though: Darth Maul looks impressive and scary, but he has no motivation of his own.

The nearest we get is Maul's line spoken to Sidious:


Revenge for what? When Luke wants revenge, it's because the Empire killed his aunt and uncle, and (he thinks) Vader killed his father. That makes sense.

What did the Jedi ever do to Maul? We are told that in the distant past, the Jedi defeated the Sith and drove them into hiding, but that was centuries before Maul was born. On a personal level, he has no reason to care, and neither does the audience.

I know there are attempts at explanation in the Expanded Universe material, but these are no use to us. The tie-in novel, comic, game, and breakfast cereal may be interesting, but are no substitute for a movie which stands on its own and tells a coherent story. On-screen, Maul's only motivation is to obey Sidious' orders and help take over Naboo, which lacks any emotional resonance.

We are told Darth Maul's mission is to capture Amidala and force her to sign a treaty of surrender. Now we have a second problem: Maul's actions are useless for achieving this goal. He attacks our heroes on two occasions:
In fact, there is a much better motive lurking in the background, which explains why Maul would target the Jedi specifically. Lucas doesn't bother to make it explicit. It's possible, even likely, that it never occurred to him in the first place, but it follows naturally from other events in the story.

Here is the explanation, as I posted on SF/F Stack Exchange a while back:

If I had to pick one word to describe the Jedi in Episodes I-III, it would be complacent. They do not notice Sidious' plot as it develops under their very noses. In Episode II, Mace Windu confidently announces that turning to evil is not in Count Dooku's character. In Episode III, Yoda completely fails to give Anakin any useful advice, even when he is in obvious distress, tempted by the dark side, and coming to Yoda for help. And so on.

Qui-Gon is an exception. He tells Obi-Wan to be "mindful of the living Force". In general, he is a lot more flexible and attuned to the present than the other Jedi. So if possible, Sidious wants him out of the way. When Qui-Gon is stranded on a backwater world with only his apprentice to help him, Sidious sees his opportunity and sends Darth Maul.

Later on, when Qui-Gon wants to take Anakin as an apprentice, killing him is even more crucial. Under the guidance of Qui-Gon (instead of the inexperienced Obi-Wan), Anakin would be much less likely to fall to the Dark Side, and when he grew to maturity he would be a formidable opponent for Sidious.

If both Qui-Gon and Obi-Wan had been killed, it would have been better still from Sidious' point of view. Yoda didn't want Anakin to be trained as a Jedi, so Sidious could have brought him over to the Dark Side whenever he wanted. By surviving and taking on Anakin as his apprentice, Obi-Wan made things a little better than they might have been otherwise.


It would have been so very easy for Lucas to make this clear to the audience. Imagine Sidious saying this to Maul, before sending him on his mission to Tattooine:

Qui-Gon Jinn is the most dangerous of the Jedi. He is not complacent like the others, and now he is vulnerable. Go forth and kill him.


And later, when Maul goes to Naboo:

Kill Qui-Gon Jinn and his apprentice, but ensure the boy Skywalker is not harmed. He must be brought back to me. He could be... valuable to us.


Now, the stakes are raised. The Jedi don't know it, but they are fighting Maul to stop Anakin from falling into the hands of Sidious, and being used to crush all that is good in the galaxy.

Unfortunately, Lucas didn't think of this, and the shark in Jaws was a better developed character than Darth Maul.

(Part 2 and Part 3 give a similar treatment to the next two prequel episodes.)
Posted by Iain Roberts at 07:00