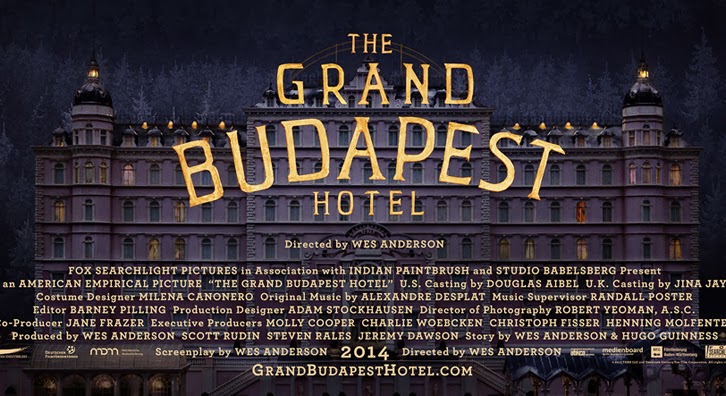 The Grand Budapest Hotel is directed by Wes Anderson, who has a very distinctive style. He creates meticulously detailed imaginary worlds. They are stylised and unrealistic, but despite this (or perhaps because of it) they take on a powerful storybook reality of their own. He has pulled it off particularly well in this instance. One of my fellow viewers who dislikes many of Anderson's earlier films really enjoyed this one.

The main action of TGBH takes place in at least three levels of flashback. It happened to a young man, who tells the story as a much older man, to a writer who sometime later writes it down, and later still we see someone sit down to read it. It serves to emphasise that the tale takes place long ago and far away, as if the journey was to great to manage in one go and had to be completed in stages.

TGBH is set in a fictitious Central European country in the 1930s. It is a mountainous land which looks a little like Austria, but it is hinted (in one of our layered flashbacks) that it later became part of the Communist bloc. It occurs in some sort of alternate history where the Nazis and perhaps Germany itself never existed; but some other power closely modelled on Nazi Germany is aggressively expanding, and war is on the horizon.

However matters of war and politics are secondary to the main story, which is like a deranged Agatha Christie novel entailing a disputed inheritance and the ownership of a priceless painting. It is populated by sneering aristocrats, a splendidly creepy assassin, helpful monks, and a sacred brotherhood of hotel staff, among many other colourful characters. The cast includes a remarkable number of A-list Hollywood actors, often nearly unrecognisable under makeup.

Some of Anderson's earlier films have been perhaps a little too stylised and self-indulgent. But the plot in this one rips along at an impressive pace, and the elaborate quirkiness is a backdrop to the action rather than a substitute for it.

This Ruritanian crime caper includes just enough darkness to offset the zany comedy and prevent it from becoming too sugary. The scenes in the 1930s show the eponymous hotel at the height of its magnificence, but in later times we see it looking shabby and faded. It is fitting that the hotel's concierge in the 1930s, played excellently by Ralph Fiennes, makes it his mission to preserve beauty, order and the highest professional standards in defiance of entropy.

TGBH is a work from an exceptionally skilled and imaginative filmmaker at the top of his game; definitely one to watch.