What Is This I Cannot Even

Reading the news seemed a harmless habit, even virtuous; but that was before the world went wrong.

I miss the old days, when we could be concerned about a stained blue dress or a guy eating a bacon sandwich. Paying attention to current affairs is becoming too much to stomach. 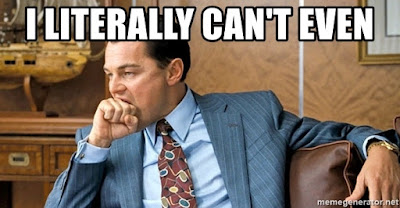 Blogging here has been light for a while, and nonexistent for a month. That's partly because I'm still settling into my new life in Toronto. Maybe some of it is blog fatigue, after four years of posting on a weekly basis. But mostly it's just... how do you react to absolute and total madness?

A little over a month ago, I hit a wall. I was writing a thoughtful piece about the death of John McCain, which at this point feels more like seven years ago than seven weeks.

Then the news blew up, more so than usual. In the USA, there were the Woodward book excerpts (remember those?), the anonymous New York Times piece, and the ludicrous circus of the Kavanaugh hearings. Across the pond, the Conservative party threatened to set all of Britain (including itself) on fire over Brexit (again); the DUP threatened to set the Conservatives on fire (because a billion pounds only buys so much cooperation); and at this moment of national crisis, the Labour Party set itself on fire over anti-semitism (again).

It's not that I've been short of material. On the contrary, I've had far, far too much to know what to do with.

How do you process events like this? How do you formulate a response other than drinking heavily and shouting obscenities?

All governments and parties contain grifters and thieves, ideologues and warmongers. If we are lucky, their activities are more or less contained; if not, they end up running the show for a while. Their motives are grubby, but at least comprehensible. What we face now is... something else.

Suppose I'm watching the game -- football, rugby, hockey, whatever. If our team is losing, that's upsetting. If our star player is absent from the field, having been jailed for driving his Lamborghini at 160 miles per hour, that's infuriating. If the other team is cheating or the referee is biased against us, that's outrageous. But all these things are within a normal framework of events.

In our current situation, an angry tyrannosaur is roaming the field, a fiery chasm has appeared in the end zone and some sort of demon is climbing out, the referee is cutting the heart from a living goat, and opposing players are performing Irish jigs in the style of Riverdance.

Some of our team are trying to pass the ball and score points as normal, although their last play was foiled when a receiver was eaten by the tyrannosaur. Some are trying to think of new tactics, to shut down unnatural abominations like the Riverdance. And a significant subgroup are having a heated discussion about the War of the Austrian Succession.

From my perspective, there is good news and bad news. The good news is that I retain the capability to be shocked. Maybe voters in the USA and UK do too; at least, enough of them to put the brakes on their descent into chaos. The bad news is that if they don't, this can get so much worse. I don't like hyperbole, but it feels like we are on the edge of something really bad here. Something that will horrify schoolchildren as they study it a hundred years from now, shaking their heads in bewilderment at how supposedly sane countries came to this.

All of which is a long-winded way of saying, I stopped blogging without notice for the last few weeks because I just didn't have it in me. But I'm going to attempt to return to a fortnightly schedule from now on. I think it does me good to articulate what I'm thinking about current events, and I hope some others may find it interesting.

Also, here's hoping someone gets that tyrannosaur off the field.
Posted by Iain Roberts at 10:00