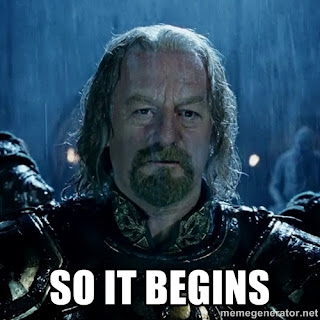 It's weird to give so much importance to Iowa. The USA is a massive, diverse country of 300 million people. It's given a crucial role in choosing its President to the three million Iowans, disproportionately old, white, and rural. Fewer than 400,000 of them voted in the time-consuming caucus process.

It's as if the UK chose leaders by first polling Norfolk, a rural county of about 860,000 people, and considered this a perfectly natural and logical thing to do. It looks very peculiar to an outsider.

It is the arbitrary and unpredictable nature of the campaign which makes it so compelling. Lesser nations can have an orderly and sober process for choosing a leader. The Americans have a lengthy carnival of voting, debating, shouting, pandering, advertising, scandalising, and voting again. From the first primaries to the general election spans ten months; and that doesn't include preliminary scrapping for position, which has been going on for at least a year.

The sprawling, unruly, and energetic campaign befits the nation it serves. The stakes could not be higher, and the predictable, establishment candidate does not always win. There is hope that some brilliant statesman will rise from obscurity to the White House; and fear that one of the clowns or lunatics will do the same.

In the immortal words of Homer Simpson:

I know that I, like many other Americans, have behaved like a total buffoon. But we Americans are England's children.

I know we don't call as often as we should and we aren't as well-behaved as our goody two-shoes brother Canada, who by the way has never had a girlfriend. I'm just saying.


Some elections are more exciting than others, but all have the capacity for surprise and drama, and more often than not they live up to it.

Looking further back, there were a few less colourful elections (1988, 1996), but most have been occasions for operatic drama and low farce, frequently at the same time. Even the most one-sided elections can be gripping. I've just started rereading Hunter S Thompson's "Fear and Loathing on the Campaign Trail," an account of the doomed attempt to unseat Richard Nixon in 1972.

This election is shaping up to be as fascinating as any of its predecessors. We may yet see mainstream nominees, conducting business as usual for their respective parties: Hillary Clinton for the Democrats, most likely Marco Rubio for the Republicans. (The Republican mainstream isn't what it used to be; some of Rubio's remarks make George W Bush look positively reasonable, but at least he isn't totally divorced from reality.)

I wouldn't place money on either one, though. In Iowa, Clinton finished in a virtual dead heat with the socialist Bernie Sanders. In contrast with Clinton's cautious pragmatism, he offers radical change, wresting power away from tycoons and corporations.

Both Trump and Cruz peddle a far-right populism which oozes bigotry and celebrates ignorance. The prospect of either one reaching the White House is genuinely terrifying.

The curtain has risen for the greatest show on earth. The rest of the world will be watching, with popcorn and copious amounts of alcohol.
Posted by Iain Roberts at 05:00