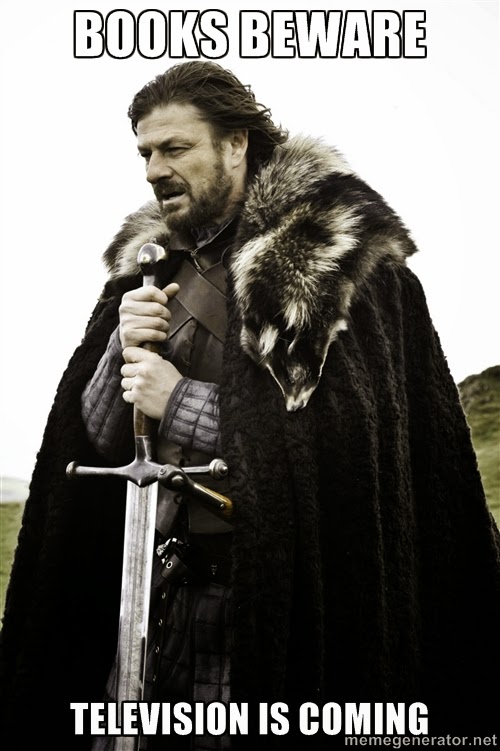 In the USA and Canada, the final episode of Series 4 on the HBO network drew 7.1 million viewers. HBO is a premium network with approximately 28.7 million paying subscribers, so about 25% of HBO's subscriber base was watching that episode. Of course the figure of 7.1 million does not include downloads, DVD or Blu-Ray sales or rentals, and the like, but for now let's take this number and run with it.

The total sales of ASOIAF books in the USA and Canada are estimated at 24 million. Again, this does not include second-hand sales, library loans, and so on, but let's accept this figure for the sake of argument. The series is five volumes in hardcover and seven in paperback, so a conservative estimate is 4 million readers.

This is encouraging for book lovers like myself. The books cannot possibly compete with HBO for cheap thrills, but they offer much greater depth and detail, and they have earned a huge audience because of it. Even in this age of electronic media and inane website posts in the form of lists, there is an appetite for a longer and more substantial narrative. I suspect the rise of the e-book has done the ASOIAF books no harm at all; in all honesty, the printed books are rather large and heavy to carry around, compared to a Kindle let alone a smartphone.

The other thing which struck me was how small these audiences are in absolute terms.

Sad to say, The Da Vinci Code by Dan Brown has sold an estimated 80 million copies worldwide since its publication in 2003. The Fifty Shades of Grey trilogy is estimated to have sold more than 100 million copies since 2011. Either one comfortably outsells all of the ASOIAF books put together.

In television, the discrepancy is much greater. This is not terribly surprising, considering that normal television is free and HBO is for paying subscribers only. By way of illustration, the 2014 NFL Super Bowl attracted 112 million viewers, about 16 times more than Game of Thrones at its peak.

For all its success and critical acclaim, the Game of Thrones series remains a minority interest. Then again, I think it's likely Game of Thrones will still be watched in 10 or 20 years' time, which is more than can be said for the rather lacklustre Super Bowl XLVIII.