Sin City: A Dame To Kill For: Review

I enjoyed the first Sin City film very much. It took every film noir and gangster cliche imaginable, and gleefully turned them up to eleven. Nine years later, the sequel Sin City: A Dame To Kill For is intermittently entertaining, but fails to deliver the swaggering good fun of its predecessor. 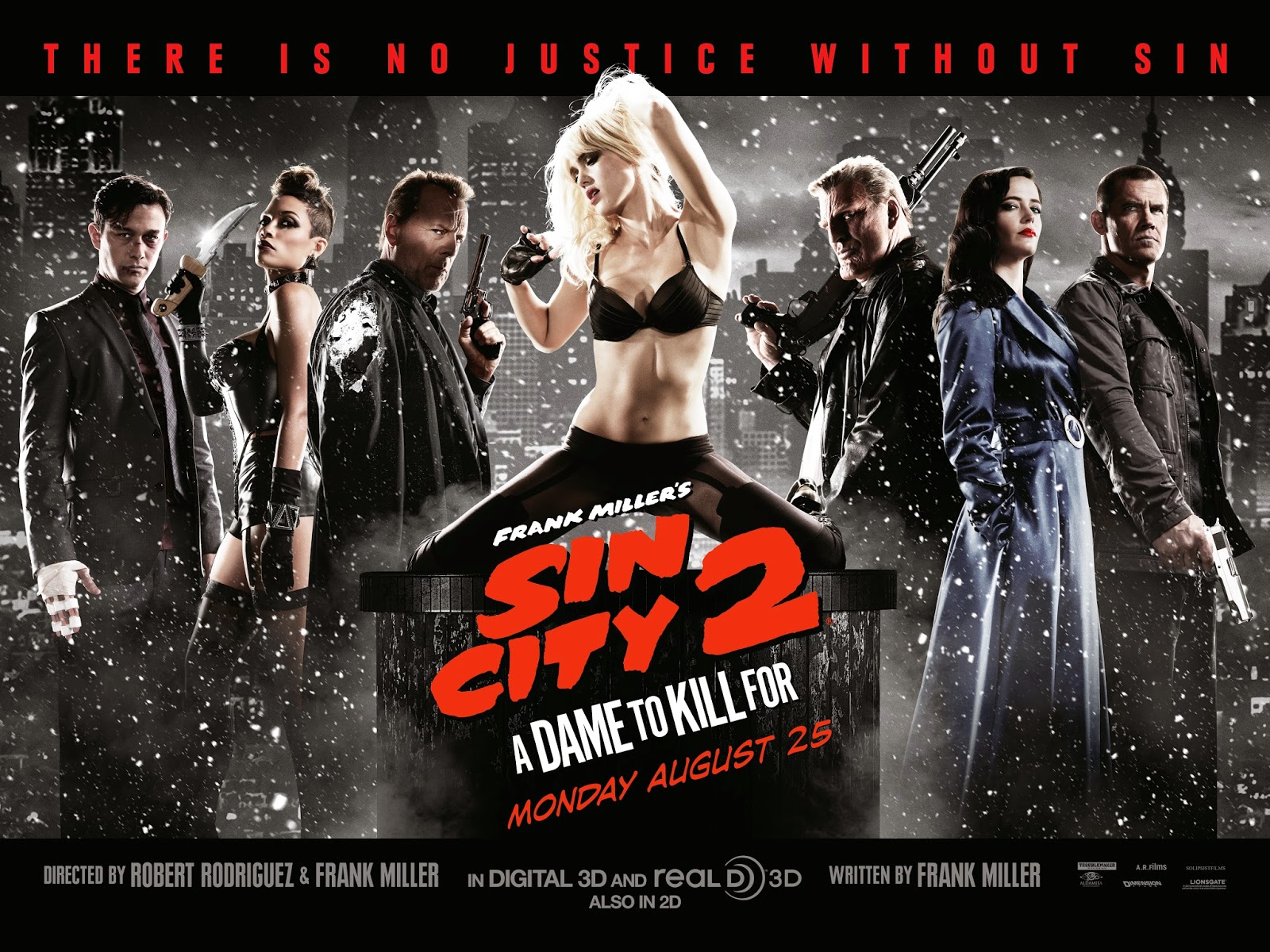 ADTKF, like its predecessor, is set in the eponymous Basin City. It is populated by merciless hoodlums, corrupt politicians, whores with hearts of gold, and tough, solitary heroes. In this world, everyone suffers and metes out extreme violence. The women wear very few clothes, and the men carry very big guns. All of it is rendered in distinctive stylised black-and-white, echoing the look of the original comics; only the occasional character, piece of clothing, or splash of blood appears in colour.

ADTKF reunites Frank Miller and Robert Rodriguez to write and direct; it has an excellent cast including Mickey Rourke, Jessica Alba, Eva Green, Josh Brolin and Joseph Gordon-Levitt. Rourke has not aged well since 2005, but is still watchable as the brutish Marv.

The main problem is, someone thought Sin City needed to be even more grim and depressing. SC1 was far from cheerful, but throughout it had an icy black sense of humour. What's more, SC1 had occasional rays of light in contrast to the darkness. There were (mostly) innocent victims, who had some character development as well as being targets for the bad guys. The heroes had a chance at a happy ending, or at least some kind of meaningful redemption.

Apart from an all-too-brief appearance by Christopher Lloyd as a back-alley doctor, ADTKF has absolutely no sense of humour. The protagonists snarl and scowl as they go about their bloodthirsty tasks. They have no discernible goals other than injuring their enemies. Joseph Gordon-Levitt's storyline has an unlikable character seeking a pointless and futile revenge, even by the standards of Sin City.

The exaggerated noir styling and cartoonish violence are still enjoyable at times. The central storyline with Josh Brolin and Eva Green has some entertaining twists and double-crossing. But with a shortage of interesting characters, the stories soon fall flat.

A minor complaint is that for anyone who has seen SC1, the timelines in ADTKF are confusing. Some are set well before the events of SC1, and one four years after. How Marv's storylines can be consistent with his fate in SC1 is unclear at best.

This is a deeply sexist film. Every significant female character spends a lot of time naked or nearly so. (Male nudity happens too, but as a momentary exception rather than a rule.) This is familiar from SC1, but much harder to stomach in ADTKF, which replaces humour with stupidity. For a woman, sneaking into a heavily guarded mansion calls for a revealing outfit of skin-tight PVC covered in shiny metal studs; the men get to wear jeans and trenchcoats. ADTKF also fails the Bechdel test.

Perhaps the filmmakers realised the material is weaker this time around, and turned up the gratuitous nudity to compensate. In particular, they have Eva Green walk, swim, or lounge around naked as much as possible. It looks like a cheap and deliberate strategy, along with the poster which had to be withdrawn because Green's garment was too flimsy.

I will be the last person to object to the sight of Ms Green, but it did not stop me from noticing the many flaws in this film. The makers of ADTKF have failed to understand that making a film more brutal does not make it more meaningful.
Posted by Iain Roberts at 09:00