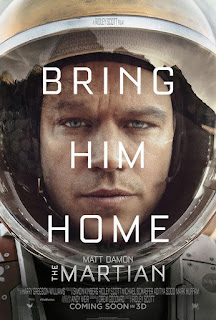 The Martian is one of the finest science fiction films I have ever seen. It has a brilliant, tightly constructed script, and is easily the best film Ridley Scott has made since Gladiator. It has likable and believable characters, using their wits, courage and hard work to confront the uncaring laws of nature.

Matt Damon's astronaut is stranded on the surface of Mars, more alone than any human has ever been. He has to survive with his meager supplies, contact Earth, and somehow find a way to get home. If the bitter cold and lack of oxygen don't kill him, he still has to fend off starvation on a planet where nothing grows.

I can't help but compare The Martian with Interstellar (which also had Matt Damon and Jessica Chastain in leading roles). Both are ambitious and visually spectacular science fiction films. On balance, I liked Interstellar very much, but at the same time it was deeply flawed. The Martian steps clear of the pitfalls into which its predecessor stumbled.

The Martian shows rather than tells. It has no pretentious speeches about the potency of love and the human spirit. When Interstellar wanted to say our ecology is fragile, it had a fungal blight destroying all life on Earth; The Martian instead shows how very hard it would be, to reconstruct even the simplest of terrestrial ecosystems. The Martian is a glorious celebration of science, but it also succeeds on a human level. We believe in the protagonist's courage, terror and loneliness, without mawkish conversations with a volleyball as seen in certain other films.

Since the end of the Cold War, most science fiction films have assumed the USA is the only country with any aptitude for space exploration. From Interstellar to Independence Day, NASA is the only outfit worth noticing. (In fact, as @quixoticevil points out on Twitter, budget cuts to NASA may result in other countries taking the lead in sending people to space.) Gravity and The Martian are honourable exceptions, with countries other than America playing an important role in the plot.

The Martian is an optimistic film which celebrates the can-do spirit of the USA, and there's nothing wrong with that. The lead characters and their mission are American; but in matter-of-fact ways, they are shown to be part of a larger world. We are one human species, and we all share in the triumphs of space exploration.

The Martian is a magnificent and intelligent movie, and tremendously entertaining.


Talking of Independence Day, I just learned there is a sequel coming out next year. It remains to be seen if the alien computers are still compatible with an Apple Macintosh.