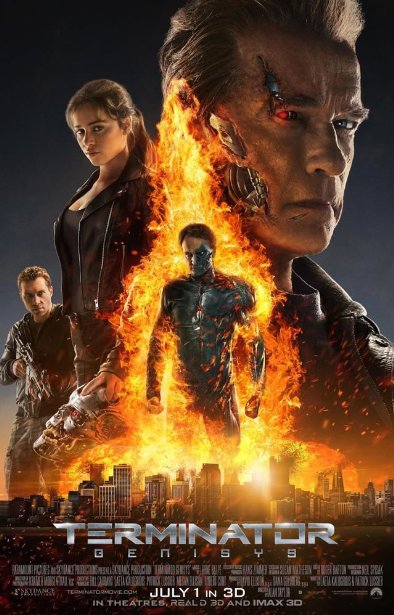 It delivers in terms of pacing and action, and has just enough tongue-in-cheek humour to be enjoyable without falling over the edge into self-parody. Schwarzenegger does well as the deadpan, aging Terminator, who after decades stuck in the past still struggles to understand human emotions. Emilia Clarke (Daenerys in Game of Thrones) is a worthy choice for Sarah Connor, combining vulnerability and steely-eyed determination. JK Simmons has a minor but immensely entertaining role as a policeman.

Some of the future-tech on display doesn't make a great deal of sense, but I'm willing to overlook that. The liquid-metal T1000 in Terminator 2 didn't make much sense either, but it was cool and scary enough that we didn't care.

That said, there are significant flaws which are not so easily waved away.

The first is a lack of character development. In T1 and T2, Sarah underwent a transformation. First she changed from innocent waitress to warrior, ready to accept her destiny as mother to humankind's last hope. In the second, she began as a ruthless fanatic who had lost touch with her very humanity, but stepped back before she went too far, and remembered the value of love and mercy. Both times, Linda Hamilton's outstanding performance made us believe in Sarah's journey, and raised the film above the level of a mere action flick.

This time, Emilia Clarke might have been able to do the same, but the script gave her very little to work with. Her Sarah Connor begins as a badass, and ends as a badass who's looking forward to a bit of a rest. That's fine for Sarah, but lacking in interest for the audience.

There are similar problems with Kyle Reese, the human resistance fighter sent back through time to protect Sarah. Reese is a lonely, traumatised, brave, and tough war veteran, who has lived his whole life in a post-apocalyptic wasteland. He has grown up idolising Sarah. In the first film, when he meets her as a waitress, he recognises the strength and courage which will make her into a legend in his time. Again, in the original film, Michael Biehn made us believe in Reese's story.

The script doesn't give Jai Courtney much opportunity to do this; even if it did, I'm not convinced he has the screen presence or acting chops to pull it off. Physically, he's too buff; he looks like a well-nourished gym rat, not a lean and hungry guerrilla fighter. Worse still, he just doesn't do well at conveying a range of emotion. His character's worldview falls apart more than once, but at most he manages to look mildly annoyed, like a man whose blind date lied about her age.

A large part of the plot rests on a time travel deus ex machina, which conveniently gives the characters information they have no logical way of knowing. It sets up a reasonably clever and interesting new spin on the existing Terminator canon, not to mention some spectacular action sequences, but it's still rather unsatisfying. Similarly, near the end a major character is miraculously saved from death. It's entertaining enough, but doesn't have the same sense of sacrifice as the first two films, where Sarah's protector succeeds in his mission but only at the cost of his own life.

Some of these flaws and other plot holes may be addressed in the next episode. Not since Back To The Future has a time-travel film so blatantly telegraphed the fact that a sequel is coming. I'm mildly optimistic about the next instalment, but I'm not expecting greatness.
Posted by Iain Roberts at 06:00