In a speech in Edinburgh on Wednesday, David Cameron gave a remarkable demonstration of missing the point:

I hope [what] will really come across in the remaining part of this campaign is the scale of the decision that Scottish people will be taking in eight days' time. Sometimes because it is an election people can think it is like a general election.

You make a decision and five years later you can make another decision – if you are fed up with the effing Tories give them a kick and then maybe we will think again. [Emphasis mine]


Scottish voters are well aware this is more serious than any normal election. That is why 97% of eligible voters have registered for the referendum.

Furthermore, the Tories received a thorough kicking from the Scots in every single election for at least twenty years, and it shows no sign of making them "think again".


The effects of a good kicking


The statistics for Scottish Conservatives are grim. In 1959, they won a very respectable 47% of the Scottish vote, slightly ahead of Labour. In 1992, after Margaret Thatcher and the poll tax, it was 26%. The terminal collapse took place in 1997, when the Conservatives received a pitiful 18% of the vote and lost every single one of their eleven MPs.

Since then, the Conservatives have managed to win back one MP out of 57 seats; but their share of the vote has declined even more, to about 16%. Their performance in elections to the Scottish Parliament has been equally dismal. 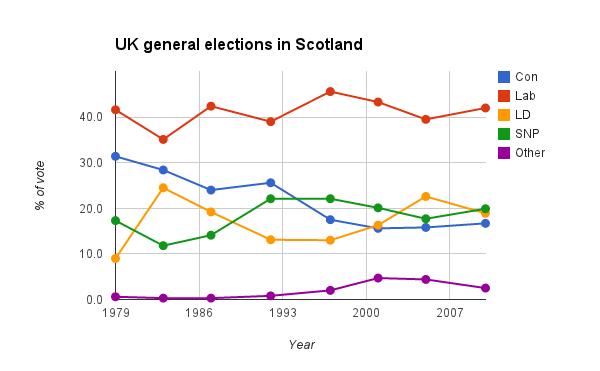 The Conservative response has been to give up on Scotland. This is not surprising. Their resources are limited, and they don't need Scotland to gain a majority at Westminster.

After being beaten time and again, they retreated south instead of coming back for more of the same. Ambitious Scottish Tories such as Malcolm Rifkind and Liam Fox have moved to safe English seats. Rifkind is a former Foreign Secretary who represented Edinburgh Pentlands for 23 years, but after 1997 he saw no political future for himself in Scotland.

The result is a vicious circle, as Scotland and the Tories become increasingly alienated from each other. As the UK Conservatives know little and care less about Scotland, it weakens their authority to govern north of the border.

Kicking them out for good?


If Scotland votes Yes, it will never again be governed by a party which failed to win a Scottish election. Never again will Scotland have an aristocratic Englishman as its Prime Minister. Fear and loathing of the Conservatives will no longer cast a shadow over Scottish politics. The question is, would that be enough?

In his clumsy and patronising way, Cameron was groping towards an important truth. Annoying the Conservatives may be enjoyable, but it is not sufficient reason to vote Yes. That is only justified if it benefits Scotland in fact as well as appearance.

What difference would independence make to government policy in Scotland? The change would be real, but not revolutionary.

An independent Scotland would still be a capitalist nation, and no less a part of the globalised economy than the UK. Large corporations would still influence government. Scotland has its own wealthy elite; for the most part they are not as rich and remote as their London counterparts, but they would continue to hold political power.

In social attitudes, Scotland is only a little further left than England. A detailed survey by the Nuffield Foundation concludes:


The SNP reflects this moderation. It did not win a landslide election victory in 2011 with policies copied from the Scottish Socialist Party. In government, it has spent money on university tuition and personal care for the elderly, both of which benefit the middle classes more than the very poor.

The SNP chooses not to raise taxes. At the first Holyrood election in 1999, it campaigned under the slogan "A Penny For Scotland", promising to use its power to increase income tax and invest the proceeds in health and education. It lost that election, the pledge was dropped and it has not been revived. Upon independence, the SNP is committed to a 3% cut in corporation tax.

Alex Salmond is keen to rail against "Tory cuts" imposed by the coalition government, and the threat of more to come. He is silent on the fact that he can increase Scottish taxes to compensate. He asks Scots to vote Yes for more powers, when he has no intention of using the ones he already has.

Salmond is no fool, and he has done this because he knows it is popular. Scotland is not eager for higher taxes, let alone radical socialism.

Scotland is a distinct nation within the UK, with its own interests and priorities. To protect them, the alternative to independence is the devolved Parliament at Holyrood. All the UK parties agree that Holyrood should have more powers. We do not know exactly what the additional powers would be, but even the existing Parliament has proved capable of standing up for Scotland.


If Scotland votes Yes, the rest of the UK would be its largest trading partner by far. Events there would have a strong effect on Scotland, but Scotland would have given up its power south of the border.

Scots have always provided leadership, ideas, and electoral strength to the Labour Party. Scotland would go from having one Westminster party which cared about it, to having none. Without Scotland's contribution, I believe the rest of the UK would be a little less fair, prosperous and open-minded. This would not only leave England, Wales and Northern Ireland poorer, but Scotland as well.

In an independent Scotland, national leaders would speak with a Scottish accent. They would live and work in Scotland, not London. They might be graduates of Edinburgh or St Andrews rather than Oxford or Cambridge, and watch football or rugby instead of cricket.

Some would be right-wing and pro-business; others, more left-wing and social democratic. On the whole, they would be slightly further left than their counterparts in Westminster. Their policies would reflect that, and be modestly different from what they can enact under devolution.

There is one important caveat: If Scotland suffered a major economic crisis such as a currency shock or oil price crash, the ideology of its leaders would matter little; it would be in for rough times regardless.

Kicking out those effing Tories may be worth doing; but the practical effects would be modest, and must be set against all the costs and risks of independence.
Posted by Iain Roberts at 07:00